WHEN THE ROBBERS CAME TO CARDAMOM TOWN
was set up at the Vasa Theatre, Stockholm, in 2001 and was performed there continuously for the following years. This version was based on a previous one from 1997 which toured around Sweden for some years. The original story by Torbjorn Egner is here located to the present time and Cardamom has become a town populated by women only (!) The confrontation with the three robbers, the brothers Casper, Jesper and Jonathan, is resulting in an exciting and fun encounter between what we traditionally consider "feminine" and "masculine ". Starring: Tommy Widerberg (Casper), Goran Blomquist (Jesper), Armand Gutheim (Jonathan), Charlotte Assarsson (Aunt Sophia), Norma Ahlqvist (Aunt Thora), Ursula Jekell (The County Police Chief Bastian), Kristin Kage (The Tram driver), Annika Listén (The Barber), Linda Krüger (The Butcher), Maria Lizell (The Baker), Lisa Bergh (Miss Tove) and Sabina Gutheim (Miss Camilla, Aunt Sophia's niece). Libretto, music and lyrics: Torbjorn Egner. Adaption, directing, choreography and music arrangements: Armand Gutheim. Set design: Urban Pettersson. Costume design: Charlotte Assarsson. Produced by Armand Gutheim and Charlotte Assarsson © ℗ 2001 Mother Earth Artists.


THE MYSTERY WITH THOR'S HAMMER
premiered at Pero's Theatre, Stockholm, in 1996 and toured thereafter around Sweden. The musical is based on the Scandinavian mythology and centers around the mysterious Professor Bergner and his two assistants Hugo and Mina. After finding evidence he appoints them to search for the god Thor, according to the myth, missing hammer. This is a musical that raises the question of what and who is really "good" and really "evil" ... The prodution was created in "teamwork" by the artists: Charlotte Assarsson, Armand Gutheim, Per Lejring and Sven-Arne Svanberg who created all the 30 roles and the live music on stage. Libretto, dialogue and lyrics: Sven-Arne Svanberg and Armand Gutheim. Music: Armand Gutheim and Per Lejring. Choreography: Charlotte Assarsson and Armand Gutheim. Set design: Barbro Hedstrom. Costume design: Charlotte Assarsson. Produced by Nabila Boutros © ℗ 1996 Mother Earth Artists.


LITTLE BROTHER AND LITTLE SISTER
in a recording from the Vasa Theatre, Stockholm, in 2001. The musical was created in a first version in 1985 by Charlotte Assarsson as the first production of The Musical Theatre. At the time, a mini-musical for only one artist, Assarsson created the five roles herself and toured with the production around the whole Sweden until 1990. A new version saw the light for the 10th anniversary of The Musical Theatre, now with two artists sharing the five roles. The musical is based on the Brothers Grimm's folk tale with the same name and is about two siblings living in the Middle Ages. They flee from their stepmother who proves to be a real witch when keeping the kids locked in. This is a musical about growing up and becoming an adult! Starring: Charlotte Assarsson (The Witch, Little sister and the Hunter) and Armand Gutheim (Little brother and the King). Music: Elia Cmíral. Lyrics: Britt Linderborg. Libretto, dialogue, staging, choreography and costume design: Charlotte Assarsson and Armand Gutheim. Set design: Antott Parholt and Berthel Martinsson. Produced by Berit Myrin © ℗ 1995 Mother Earth Artists.


THE KING'S ISLAND PLAY
was commissioned by the City of Stockholm for the task to be the European Capital of Culture in 1998. The musical had its premiere at the Kungsholmteatern (King's Island Theater) the same year and was set up again the following year during a cultural festival in the district of Kungsholmen (King's Island). The plot consists of an odyssey based on Stockholm's multi-faceted history from the 1200s to our days focusing on Kungsholmen. Starring: Stig Ekstam (The Abbot), Ruth Cronstrom (The Magic Lady), Tommy Widerberg, Astrid Rang, Rutger Nilsson, Ozz Nûjen and another 25 artists and musicians. Libretto, music, lyrics and directing: Armand Gutheim. Choreography: Charlotte Assarsson. Set design: Nisse Skoog. Costume design: Ulla Oddsdotter. Produced by Armand Gutheim and Charlotte Assarsson © ℗ 1998 Mother Earth Artists.

GAYTIME
was a television program made by Swedish Television in 1969 in which this pas de deux, created by Ulf Gadd, was included. It was recorded on a pontoon raft in Näckrosdammen (the Water Lily Pool) in Gothenburg. Starring: Charlotte Assarsson and Ulf Gadd. Choreography and costume design: Ulf Gadd. Music: Wolfgang Amadeus Mozart. Produced by Swedish Television © ℗ 1969 SVT. 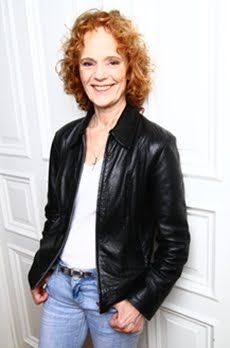